Both shows are cast.

We hope to present them next year!

Waiting for Godot is a play by Samuel Beckett, in which two characters, Vladimir (Didi) and Estragon (Gogo), wait for the arrival of someone named Godot who never arrives, and while waiting they engage in a variety of discussions and encounter three other characters.

The English-language version premiered in London in 1955.

In a poll conducted by the British Royal National Theatre in 1990, it was voted the

"most significant English language play of the 20th century".

Don't Drink the Water is a play written by Woody Allen that premiered on Broadway in 1966. The farce takes place inside an American Embassy in an unnamed European country behind the Iron Curtain The American Ambassador must leave the Embassy for business and, in his absence, he places his incompetent son Axel Magee in charge. Almost immediately the Embassy is thrust into a crisis as the Hollanders, an American family of tourists, come rushing in on the run from the Communist police. Walter, the father, had accidentally snuck into a high security area and taken pictures, causing the communist to believe the family are spies. Axel digs the hole deeper and the embassy is surrounded, leaving the Hollanders trapped.

For more information about AUDITIONS,

you may fill in the boxes below

Contract
Fill Out Chart Below*
or Email:
Audition Form 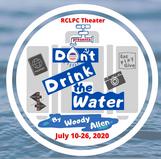 ​to Request an audition:​

*If you are not a member of the Co-Op​

​please also​ send a copy of your

headshot and resume to office@rclpctheater.com.

Thank you for contacting us! If more info is needed, you will hear back from us ASAP.